Many of Alan’s waterski friends shared memories and thoughts of how Alan had helped them. These are interspersed below between some tournament photos from our archives and from Shep’s on SmugMug. 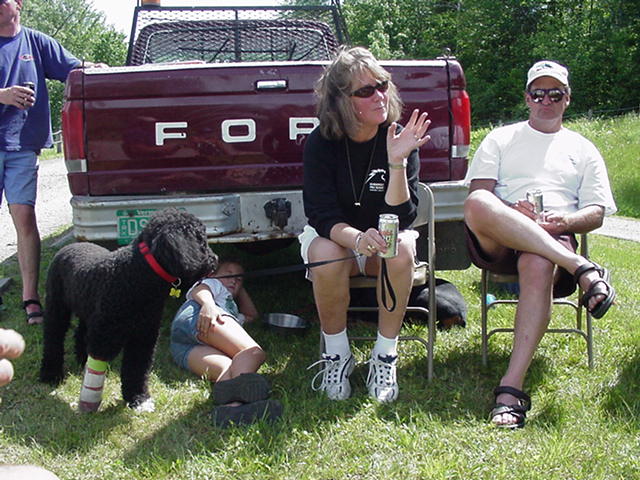 Alan, Connie and Gino at the 2000 Vermont Slalom Derby.

Alan always had time for you. He sincerely cared about what other people where doing. When Alan came to the New England Slalom Championship, he made it a better tournament. We will miss you Alan and you will always be in our thoughts, whenever we are out there on the water. I have not stopped thinking about Alan, … he was such a special guy.
–Mike Tilton

Alan was a true friend. Someone you could always rely on. When Donna first qualified for Nationals by placing in Regionals she did not feel she was good enough to go, but Alan helped convince her she belonged, and was there with a big hug when years later she medaled. There are so many good memories. I will always remember the drive we shared to the Eastern Regionals in Erie, PA. We talked about everything. I also knew the “construction business Alan.” His word was his Bond. We have nothing but great memories of Alan. He was a Champion & everyone’s champion. He was genuine. The REAL DEAL!
–Bruce & Donna Epstein 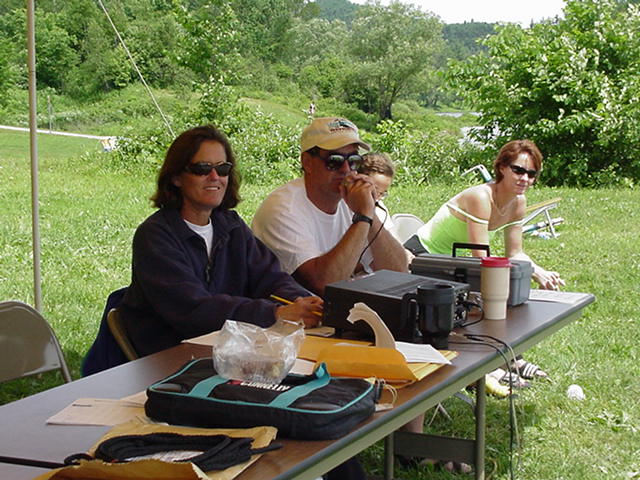 To Alan’s Friends,
Yeah Alan was a nice guy… always spoke to me even thought 28 off was all that I could ever hope for… one of those guys that always made you feel like you mattered. He could have easily let his success on and off the water affect him like some of the Marin County / Squaw Valley / Lake Tahoe snobs around here but he didn’t. He stayed at my house once during a Dube’s Pond Tournament… Nancy and I were estranged but taking turns living in the house. I think I made dinner, we drank a few beers and talked about life in general. As we sat in my four bedroom empty house with the in-the-ground pool, two stall garage with no room for the cars, my two dogs and a job to support all this on the line, he reminded me that it was not the materialistic things that were important. He spoke of his daughter’s coffee shop at the base of Vail, CO. Maybe I owe my current life out here in Reno, NV, base camp to the Sierra’s and Lake Tahoe, in part to that evening talking to Alan. Anyway, that night he slept on the sleep sofa and my dog Jake joined him in the middle of the night. The next morning Alan just informed me matter-of-factly that he thought Jake had flees. He just took the exposure and the itching in stride not making me feel bad though I did. He told me of his bad ass turbo Porsche. He said it had so much power he could get the front tires off the ground with the throttle! He got over that excitement quickly and turned the keys over to Connie. I’ll never forget the day at Dube’s Pond as I’m sure he didn’t either when I introduced him to my 27 year old girlfriend Tammy. Later he asked what happened with Nancy to which I replied, “I had a change in the line up.” I thought he was going to wet his shorts right then and there! And then unlike some of my friends, he was always so excited and appreciative of my t-shirt efforts at Dube’s Pond. He was the only one to buy the one off sweat shirt I had printed and he paid the $35.00 asking price with no hassles. I remember someone either Bruce or Mark reading Alan’s bio while he was standing on the starting dock getting ready to take his pass in the Vermont Slalom Derby. He introduced Alan’s occupation as a water skier and his hobby in construction. He had my respect right then and there!!

I’m sure we all have our fond memories of Alan and he will be missed. Alan gave a lot to all of us and it is up to us to take it, use it and live life as he did, with passion and the ego in check.
RIP
Chris Ober 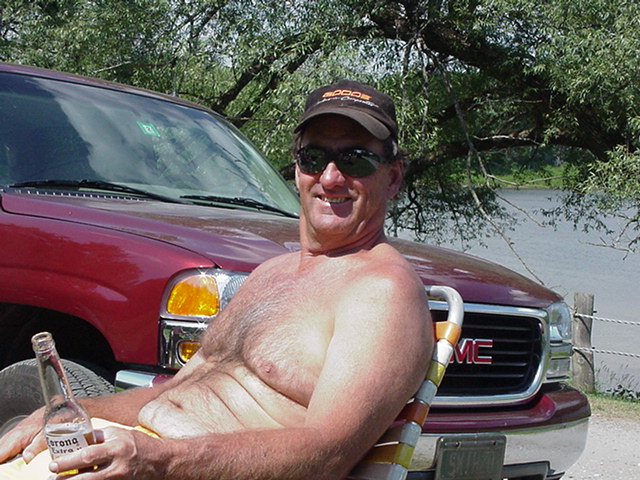 And at the 2003 Vermont Slalom Derby.

He was certainly a highlight of all the tournaments that he was a part of. Regardless of how you skied, he was always eager to talk with you and even share pointers if you had a bad set. Al always made new skiers feel welcome, regardless of ability. His passion for the sport was contagious, and his enormous contributions and most importantly his wonderful personality will be dearly missed by all of us.
–Brian Decker

While I only saw him at a couple of tournaments, I think he talked me into my first one that wasn’t put on by Brian McNeil. He was so encouraging and supportive. I had been practicing at 24mph due to info I got from Jim McNeil. Imagine my surprise when I got there and was told the minimum was 26mph. Again, he encouraged me to do it. I think I made 1 or 2 balls and I’m not sure I’ve gotten much better since that day over 20 years ago but it’s always been fun.
–Halle Davis

Al made an impact on alot of people! He didn’t come to Dubes last year and we simply weren’t able to replace him. He was otherwise always a big help over there and it’s yet another place where he’ll be very sadly missed.
–Paul Myers

Alan was the one that helped me make the leap from ski hacking at tournaments to real, capable skiing. Instead of telling me specific things to do to improve my skiing, he said I needed to come to better tournaments and to start being in the presence of better skiers and all the information flow that occurs. Once I became a driver, it was comforting to have Alan sit beside me in the judge’s seat and know that together everything would stay in control and good decisions would be made when necessary. He always had the skier in mind and wanted to provide a professional, fair and encouraging atmosphere in which to succeed.
–Darlene McCormick

I am so saddened by the news. Alan was a great man, always welcoming new skiers to the scene and making them feel comfortable. I also remember how Alan always asked how others skied, and how it was not about himself, but he had a true concern of others…A true gentleman! Every summer he asked about my daughter, Michelle, even though she had been away from the sport for years. I also know how he spoke of his daughter and how he was so proud of her.
–Patti Nixon 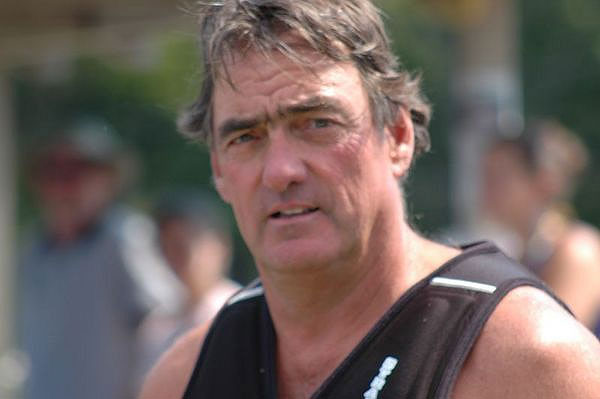 …read that Al passed away. To say the least I’m shocked and saddened. Al represented what is right with water skiing today. He was a gentleman, always striking up conversation with anyone and everyone and always there with his extensive wisdom on the sport. I did not know Al like all of you up north, but I feel like I lost a friend.
–Pat Morrill

We called him “Big Daddy,” a soft spoken giant, a leader amongst his peers. Alan spoke little of himself, his actions spoke for him. Yet he was inquisitive, often taking the time to check in with others just to see how they were doing. Most notable however, was his love of family whom he would often reflect with pride and joy. These were the moments that I most enjoyed with Alan, the skiing was just the vehicle that brought such friendships together. I’m glad to have known Alan, he leaves a legacy that I’m certain will stand the test of time. I imagine I’ll think of Alan this June when Dube’s Pond Ski Club hosts its 18th June Slalom Festival, an event he enjoyed, rarely missed, and helped make everyone feel welcome and important (something I hope we retain without him, yet perhaps because of him).
— Dave Van Ham 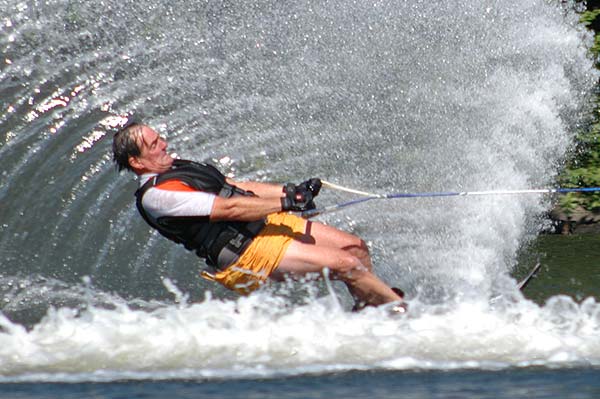 Al and I shared several memorable firsts, first tournaments, first Nationals, we skied on the same brand of ski from time to time. I don’t think I was alone in checking him out at the beginning of each ski season, to see how he was skiing, how much weight he had packed on over the winter, what ski he was on, etc.. I was trying to figure out what kind of shape I’d be in in eight years. I was using him as a gauge for the future, I think a number of us were. This went on for twenty years.
I’m still in disbelief. The memorial service was such an emotional eye opener for me. It’s just too bad he couldn’t have been there too. Maybe he would have seen all the people that benefited from him. “Big” Al left an enormous wake.
— Bill Putnam 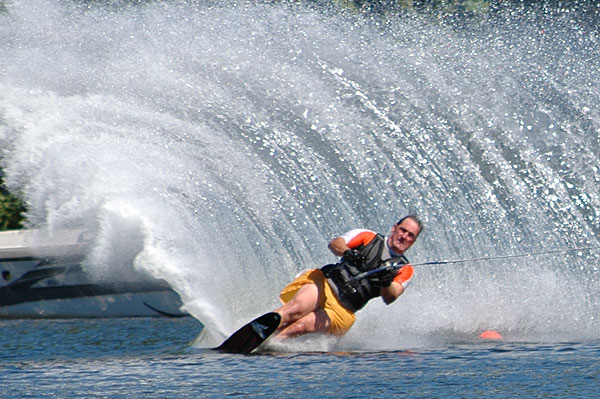